THE BEST YEARS FOR EMPLOYMENT SINCE 2000

On March 6, the California department that monitors employment released its revised numbers for total jobs created in the state last year (2014) and the year before (2013).

All of the information on job counts was revised upward, and sharply, meaning that conditions in California were clearly better than what we’ve been reporting for the last 12 months.

Instead of 339,000 jobs being created in 2014, the revised count was 462,000 jobs in the non-farm sector. And counting the farm sector, employment was higher by 468,000 meaning that despite the drought, agricultural industries still hired more workers during 2014. Farm employment in California is now at it’s peak, along with non-farm employment. 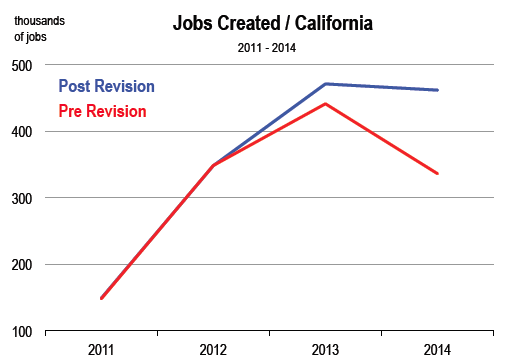 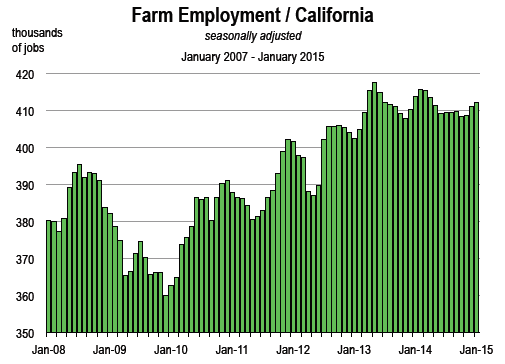 For the month of January 2015, 67,300 jobs were created. The average number of jobs created per month during calendar 2014 was 39,300. Consequently, January’s rate of hiring by California firms was prodigious, eclipsed only 3 times before in the last 15 years.

California’s population represents 12.1 percent of the total U.S. population, but the state accounted for 21 and 18 percent of all the jobs created in the nation in 2013 and 2014 respectively. Consequently, California has exceeded the nation’s pace in job creation even though it’s unemployment rate is still a full percentage point above the nation’s.

What Types of Jobs?

Job gains are broad based with all sectors of the California economy now participating.

Job creation is largely occurring in sectors associated with higher wages and salaries because they typically require skilled workers. This includes the professional and business services. The construction sector is bouncing back, adding 85,000 new jobs in 2013-2014.

Other major contributing sectors of the California economy include the healthcare and education sector, leisure and hospitality, retail trade, and state/local government.

What This Means to You

Employment levels are at an all-time high in California, and the rate of job creation is occurring at the fastest pace in a generation. Full-time work is far more available now than ever before in the post-recession period. Consequently, additions to the labor force are now at their highest level since 2008.

The state is on a path towards full employment, likely to be reached by mid-2016. At that point, 7 years after the recession ended, a labor shortage may actually occur. Expect many job openings to be advertised in California this year and next, with gradually rising average salaries as the labor market tightens further.