THE 2015 ECONOMY: PROGRESS TO DATE

The Labor Markets are the Best Indicators of Economic Vitality

In spite of weaker GDP readings this year, the U.S. economy is still expanding, evidenced by the prodigious creation of jobs. We are on a pace to add another 3.1 million jobs to the total working population after creating 2.5 million jobs last year, the most since 1999.

In the latest report for June, the U.S. job market tightened further as a number of measures of labor market utilization improved. The unemployment rate is now down to 5.3 percent, and total employment increased by a solid 223,000 workers.

A missing part of the complete labor market story is higher wages. They have remained unchanged for the last two months. The average wage is up only 2 percent on a year-ago basis. There is no doubt, however, that stronger wage

growth is coming but it may not occur until the unemployment rate hits 5 percent or less.

We don’t believe the June employment report changes the odds of a September increase in the federal funds rate. Financial markets may have a different viewpoint. The 10 year U.S. Treasury bond has remained in a tight lateral range for the last month: 2.3 to 2.5 percent. As September draws closer, the Fed will have to begin telegraphing its move, as it doesn’t want to surprise the financial markets.

Job growth in May was much stronger than expected with 54,000 new jobs created. The jobless rate declined to 6.2 percent. Professional types of jobs constitute a large portion of new jobs in the state this year, and with more residential and commercial development underway, the construction sector is one of the leading engines of job growth. 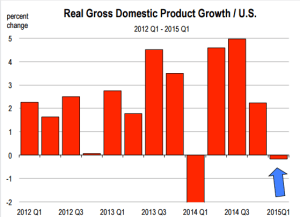 Cold and snowy weather impacted the economic data again, and was responsible for the negative GDP report during the first quarter of 2015 – just like last year. Actually the snow levels were a lot higher in January and February. It’s hard to go to the mall when the mall and the road there are buried in snow. Furthermore, I just hate to use GDP as the benchmark indicator of how the economy is performing. Why? Because it’s out-of-date. The value that GDP is measuring is not keeping up with how technology is impacting the economy. For example, our own assessment of the value of software today is infinitely greater than that same software 20 years ago. Microsoft office can do a zillion more things today than it could do in 1995. Yet we don’t pay any more today for Microsoft office. In fact, we often pay less. And it’s what we pay that get’s recorded into GDP, not the fact that we are able to get a lot more done spending a lot less.

Existing home sales continue to improve this year. In May, the annualized rate of home sales eclipsed the previous post-recession peak that was largely characterized by foreclosure sales. A recovery in housing is becoming much more apparent. Because mortgage rates are not expected to rise sharply for the remainder of the year, sales should continue to improve, in line with the explosive labor markets. Household income is also rising with more of the labor force becoming employed.

Nationwide, home price appreciation remains strong. On an annual basis, the median existing home price increased 8 percent in May, compared with a 4.4 percent appreciation rate observed a year ago. In California, home prices for the first 5 months of 2015 are 6 percent higher year-over-year.

Summary and Outlook for the Remainder of 2015

The economy remains strong. The environment for hiring hasn’t been this auspicious in 15 years. Look for higher wages and salaries this year and next, because we are embarking on a labor shortage. Interest rates are up 60 basis points from their lows for the year on February 2nd. Look for the 10 year U.S. Treasury rate to average 2.6 percent in the third quarter (It’s currently at 2.39 percent), and closer to 3.0 percent in the 4th quarter.

The fundamentals are still in place for a strengthening housing market, despite higher rates by early autumn. Mortgage credit standards will continue to gradually loosen. And as interest rates rise, we expect further loosening.

We don’t see much change in the economic momentum for the remainder of the year. The economy appears to be firing on all cylinders now.