Throughout the Great Lakes Region and the Eastern Seaboard, there is record or near record bitter cold. Negative temperatures are being recorded in more than 20 states. The ferocious arctic front is diving as far south as the Gulf of Mexico. Atlanta recorded a high of 26 degrees and there are freeze warnings in Florida. The map shows the wind chill temperature on February 20 at noon eastern time. This is clearly the coldest day of the year or even the decade for most eastern cities. Meanwhile the high yesterday in Thousand Oaks was 72. 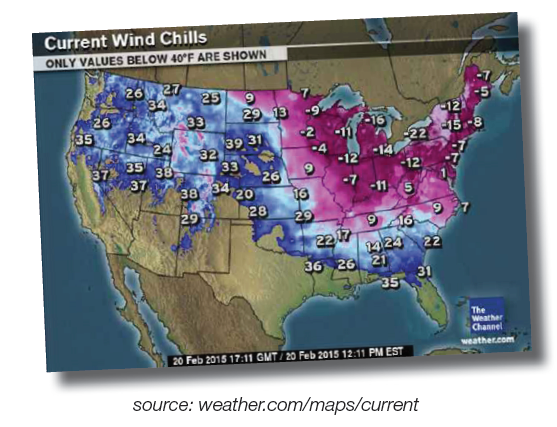 The dark pull of the Great Recession has now let go. The economy is growing at its fastest rate since the mid 2000s and the rate of job creation is prodigious. In fact, it’s the strongest growth since the technology boom 15 years ago.

More than a million jobs were created over the last 3 months. And there are now more open work positions than hires each month. Employer surveys indicate that nearly one-half of respondents say they are hiring.

Consumers are benefiting from more job opportunities, lower gasoline prices, extremely low interest rates, a strengthening dollar, rising equity in their homes, and near record stock market values. And soon, they’ll be the general recipients of higher wages and salaries.

Prospects for increased housing production this year will generate even more employment opportunities, higher wages, and faster overall growth in the national, state, and regional economies.

While bitter cold grips much of the nation, overall economic growth is the hottest we’ve observed since 2005.

In California, the labor market is creating jobs at a faster pace than the nation. Consequently, the unemployment rate is falling like a rock. More homebuilding this year will create more jobs. Demand for both new and existing homes will increase though only gradually. So much of the “millennial” population currently lives in apartments or with their parents and are not buying homes.

But this condition will change, albeit slowly. So expect a longer drawn out expansion of housing, more new jobs associated with housing, and more inventory to choose from. Higher interest rates will also accompany these trends as the Federal Reserve gets ready to push rates higher during the summer months.

Well, it’s been about a decade since the last time the economy was operating at full employment. And though job growth won’t immediately slow when the economy reaches full employment, we may atypically be facing a scarcity condition for workers in some sectors. There is some likelihood that the economy’s biggest problem by 2017 will be a lack of qualified labor.

Anything cooling this year?

We don’t expect much cooling this year, unless you’re talking about winter weather in any place but the west coast. The current evidence strongly shows escalating momentum in the labor and consumer markets. And when you combine that with gasoline prices that will stay low, interest rates that will stay low, and the U.S. dollar that will continue to strengthen this year, you get near perfect storm conditions that produce an economy growing above it’s potential.

Now, barring any major and unexpected calamities in the geopolitical arena, the economy should remain in high gear for most of the year. As housing ramps up this year and into 2016, it should offset sectors that may be dragging, such as our export sector due to the strong dollar.